This article is not going to say which is better; that’s your decision and it’s subjective depending upon so many factors. We will try to explain the jargon so that you might be able to make a more-informed buying decision.

In the world of modern screens, there are actually a small number of “base technologies” called LCD, LED, and OLED. Each screen technologies has various slants, tweaks and enhancements brought forward by various manufacturers to better compete in the market. You can read about the core technology differences in our other article Don’t get LED astray.

Debates will continue forever as to the pros and cons of each technology and enhancement, and as you would expect the marketing folk will promote their own acronyms, buzzwords and features.

Consumers live will their choice of television for a long time. It’s important to understand what they are buying and why.

A summary of the core differences

To position this article, here is the briefest of explanations. See our article Don’t get LED astray for a detailed look.

The screen comprises a backlight (a light that spans the whole screen). That line shines though the LCD screen which is made up of pixels (a pixel is one dot on the screen), and each LCD pixel goes clear or opaque (“on” or “off”), thus making up the picture you see. In an LCD screen, the backlight is a single unit – usually a type of fluorescent light (or lights) at the side of the LCD panel (you might recall seeing LCD TVs with a big plastic bezel around the screen…). Advantages include low cost and relatively high brightness. Disadvantages are size (i.e. thicker and bulkier), higher relative power consumption, bigger relative overall dimensions, and (importantly) imperfect blacks – basically an LCD pixel can never totally block the backlight hence a “black” pixel is really just a “very dark grey”.

This is the same basic technology as an LCD. Yes – read that again. Some marketing folk will have us believe that each pixel has it’s own LED. In fact that is not the case. Simply – an LED screen is the same technology as an LCD, except that the backlight is made of LED lighting rather than a fluorescent lamp. The screens tend to be thinner than LCD, use less power and are cooler. Some LED screens have the LED light at the edge of the screen (just like LCD) but some have the LEDs spanning the screen which enable a feature called “local dimming” – where the not-truly-black disadvantage of LCD is partly reduced so that the screen has better blacks. However, that is limited to “zones” of the screen – not every pixel.

OLED is a different technology. It does away with the backlight completely. Every pixel is made up of it’s own (Organic) LED which can switch on or off. And yes – this means you get true blacks on the screen. Other advantages are very (very) thin screens, low power, and (probably) more environmentally-friendly (I say probably because there is a lot more electronics in a TV than just the screen panel). Disadvantages are (thus far) higher cost for the bigger screens and they are not as bright as LCD or LED.

Where does QLED fit in?

It would be a mistake to assume that – because Q comes after O in the alphabet – that QLED is a step up from OLED – just like an OLED but more advanced. Nor, because Q looks like O, does it mean they they use the same underlying technology.

To be clear a QLED screen is not an OLED screen, nor is it any type of OLED. QLED is in fact “just” an LED screen but with an important enhancement called “Quantum Dots” – which do actually exist!

There is so much information out there on quantum dot, we are not going to describe its inner workings here. We will summarise it by saving that a quantum dot passes a pure coloured light of it’s own when illuminated by the LCD backlight (the colour is dependent upon the physical size of the dot – although these dots are all very very small). Therefore if you put quantum dots in front of the LED/LCD panel – it will product brighter pixels. And I mean much brighter.

If you go into a large TV retailer (you know the one I’m talking about) you will see Quantum Dot TVs featured heavily. I make no analytical comment on picture quality – but what actually strikes me is the brightness of those screens. The main manufacturer in the space clearly has deployed “demonstration graphics” that bring out the best quality of quantum dot. And on the face of it they look terrific.

However, they are LED screens, and so cannot produce the blacks as well as OLED. And OLED is a thinner technology and claims to have a wider viewing angle and better response times.

Do the blacks matter?

Maybe, maybe not. If you watch a movie like the fantastic Gravity, the darkness of space would be better in OLED, but the explosion and collision scenes would be more dramatically portrayed by QLED; in my opinion. I prefer OLED for the blacks.

Talking of my opinion, blacks are relative. In the “old days” battle between LCD and Plasma, Plasma produced much better blacks (for the same reason as per OLED) but to the eye one didn’t notice until you saw the two screens side by side – when it was more obvious which was most black. If QLEDs are much brigher, then their blacks might appear to be black. But, nothing is more black than something that produces no light and a pure black base is naturally better to display contrast. Unless the demonstration videos are purposefully over colourful and bright, I personally found the OLEDs to be a more comfortable viewing experience. In a really bright room with lots of sunlight pouring in, then QLED would have the advantage.

Technology engineers will probably scream when I suggest that a quantum dot layer in front of OLED might be a good idea (if not expensive).

What should I buy?

There are three considerations here:

So, it’s not a cop-out when I say – it’s up to you what you buy. But it really is. If I had the available cash, personally I would buy a big OLED screen, because overall I prefer that technology platform. But when walking into the retailer, it would be difficult not to be swayed by the lower cost – and I have to say impressive – QLED screens.

As I say, it’s your choice. But QLED and OLED are not the same thing.

These are some newer OLED TVs we have recently spotted. These would be our first choices as they are OLED, big! and are Ultra HD Premium Certified and under £2,500. Of course, you may not want all of these features or want to spend more; but this would be our personal preference.

Don’t forget, you can usually buy QLED TVs at a lower price point, and choose from a wider range. 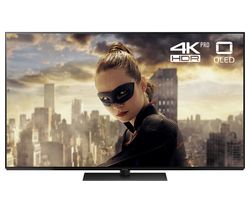 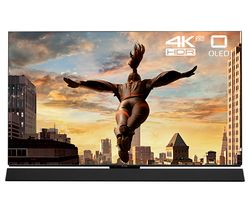 Listings correct as of 6th November 2018 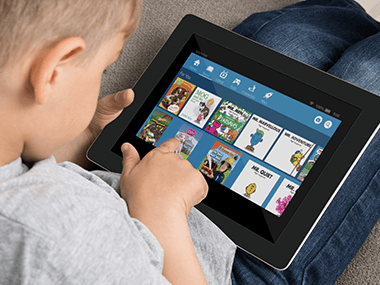